I’ve been reading Bengali Cooking: Seasons and Festivals, by Chitrita Banerjee.  Her book is not so much a cookbook, in the way we have become accustomed to cookbooks, with their glossy pages and beautiful photographs, but rather is a series of essays about food and religion, food and ritual, food and culture.  Through her homage to Bengal’s beauty and abundance, I am learning much about Bengali food history.  Ah, but if only she had photographs.  My imagination will have to do its best.

She has a chapter titled Winter or Sheet.  Of winter in Bengal she writes, “Crimson roses, yellow and bronze chrysanthemums, blazing marigolds and multicolored dahlias clamor for attention.”  See what I mean about the photos?  Hmph.  In my world, this chapter would be called Sleet, which is what we had last week and what we’ll have again tomorrow.

She continues, “The most important and joyful thing about winter to a Bengali is the opportunity and ability to eat far more abundantly than during any other season . . .”  She then goes on to discuss the immense variety of produce that becomes available during winter and notes that many of Bengal’s most popular vegetables are imports, that tomatoes, potatoes, cabbage, cauliflower, peas, and beets were introduced by the Portuguese and the British.  Various sources on the Internet state authoritatively that cabbage was known to the ancient Mediterraneans, and was introduced to India much later, either by the Mongols or by the Portuguese.  I learned recently that India is the second largest producer of cabbage in the world, second only to China.

Cabbage with Peas and Potatoes

I served this dish not too long ago at a comfort food themed pot luck, and it received many compliments.  Guests were surprised that cabbage could taste fragrant and sweet, not bitter, sour, or stinky.  A note about vegetables and Bengali cooking.  Most vegetable dishes don’t contain onion or garlic.  The reasoning is twofold:  onions and garlic are often thought to interfere with, or overpower, a vegetable’s inherent sweetness and delicate flavor.  The second one is embedded in the political and religious history of Bengal, which upholds that onions and garlic are inextricably linked to non-vegetarian items; therefore, an orthodox Bengali vegetarian would not eat food seasoned with onion or garlic.  The following dish was a staple in our household.  It holds layers of flavor, sweetness commingling with earthy and spicy.

1 head green cabbage, mine weighed approximately 2 pounds.  It will seem like a large amount when raw, but will reduce substantially when cooked.

Wash and peel the potatoes.  Cut into ½-inch cubes and set aside.  Wash the cabbage and quarter.  Remove the core carefully, and slice the cabbage very thinly, as you would for coleslaw.  Set aside.

Add oil to a large, heavy-bottomed pan, heat the oil for a minute of two and then add the tej leaves, cinnamon and fennel seeds.  Heat the oil until the cinnamon becomes fragrant (about 2 minutes). 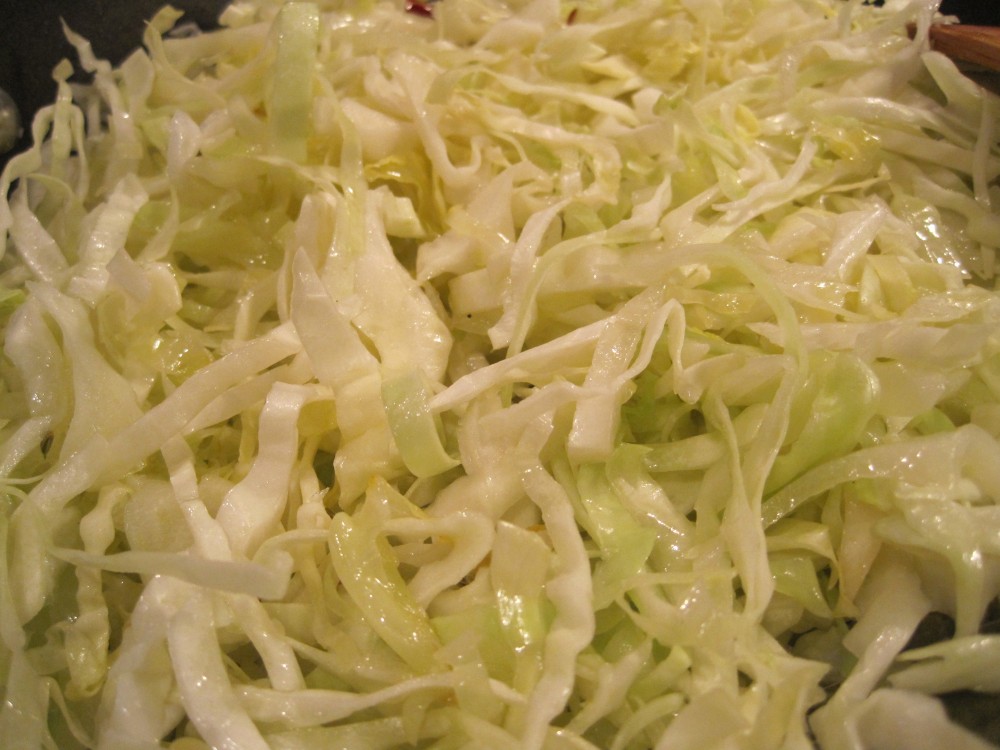 Add the cabbage to the oil and saute for approximately 5 minutes or until the cabbage has wilted somewhat.  Season with half the amount of salt you think you will need, because the cabbage will reduce further.  Add coriander, cayenne, ginger and turmeric and continue to saute over medium-low heat, stirring occasionally.  After another 5 minutes, add one teaspoon of sugar, cover the dish, turn heat to low, and set timer for 10 minutes.

In a skillet, fry the potatoes with a little salt until golden-brown.  Do not overcook the potatoes.

Return to the cabbage, which should be nearly finished.  At this stage, add the frozen peas, a squirt of lime juice to balance the sugar, the cardamom and cayenne pepper.  Stir to incorporate and taste.  Add more salt, lime, sugar, or cayenne if needed.  Add the potatoes and stir thoroughly to combine.  When all the flavors are balanced and the cabbage is soft but not mushy, the dish is done. 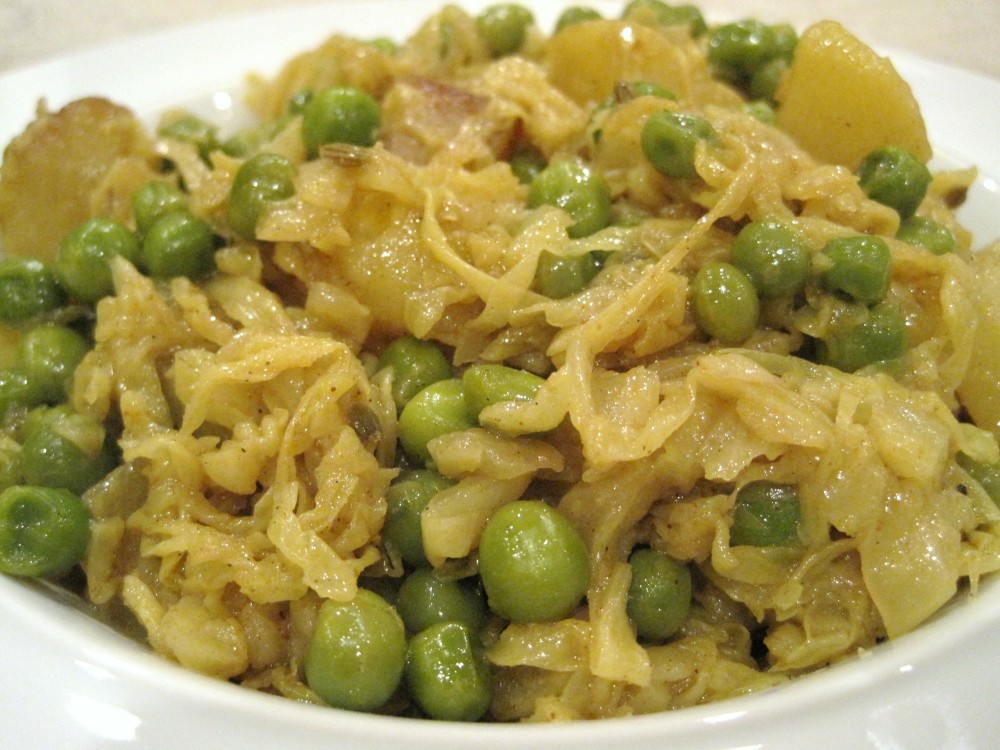