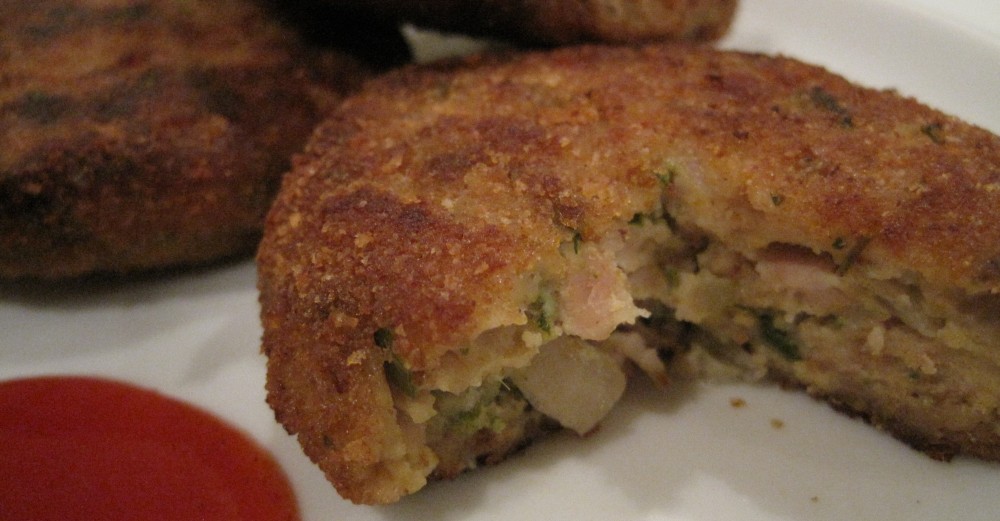 The more sophisticated the dish, the more it hogs the spotlight.   It’s unavoidable.  Guests coo and admire: “You must have spent so much time making this!”  We bask in their admiration, glowing because the dish was in fact an effort: many steps, much time, and perhaps some anxiety.  A commitment.  But if the dish succeeds, we are remembered as the ones who pulled it off.

And then there are the other, less sophisticated relations, a little more subdued, grounded even.  They’re our favorites, our back pocket babies, the ones that are not quite as intricate, and because of their ease, they are more popular with us insiders.  No one has to know that the  planning or prep time was cut in half.

Today’s post is about the Bengali tikkia, which is not to be confused with the non-Bengali “tikka” (as in Chicken Tikka Masala).  Tikkia, also called “tikki” in North Indian languages, is usually made with potatoes, a kind of potato croquette.  It may be thought of as the less elaborate cousin of the chop.  At some point during my childhood, my mother introduced us to tikkia made with ground turkey, and it quickly became a favorite.  Tikkia require half as much time to make as chop and have now become part of our inner circle.  As a Bengali appetizer, tikkia are often served before dinner parties or as a tea-time snack.   They are pan-fried and need little oil.   A breadcrumb coating is optional but provides an extremely satisfying crunch, delivering on the promise of deep fried decadence but without the hassle.

¼ cup bread crumbs for the tikkia mixture, another ½ cup for the outside coating

Combine all ingredients in a large bowl, reserving ½ cup of the breadcrumbs for the outside coating.  Mix all ingredients together very thoroughly using hands.  Shape tikkia mixture into small patties, about 2 inches in diameter, using oil to coat hands and keep meat mixture from sticking.

Spread the breadcrumbs in a shallow dish and coat tikkias.  Heat several tablespoons of oil in a frying pan and cook until golden brown on each side, about 12-15 minutes per tikkia.

Keep it simple.  Serve with hot and sweet sauce from the bottle.